A Love for the Game

For the last 20 years, Mariana and Brian Orwig have lived the soccer parent life, driving their three girls to practice and games while working and raising their family.  All three of their girls, Adriana, Briana and Scarlett, found a love of soccer and played on a national club team, throughout their middle school and high school years. Adriana and Briana both went on to receive college soccer scholarships.

As the youngest of 3 girls, Scarlett learned to walk and kick a soccer a ball around the same time her older sisters began to play.  She started playing the game at three years old and has consistently played for club teams since the age of 5 years old.  At a tournament in November of 2018, Scarlett suffered a fracture to her right ankle. In March of 2019, she experienced another fracture this time on her left wrist. A collision with a boy during practice in June of 2019 resulted in a fracture to her right wrist and caused a back injury that refused to heal. 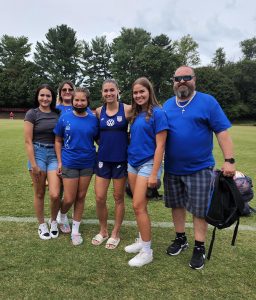 While the doctors didn’t think anything was out of the ordinary for an athletic pre-teenager, Mariana’s mother’s intuition kicked in when Scarlett didn’t bounce back from the back injury. A visit to the pediatrician led to blood work, and in August of 2019, Scarlett’s life took an unexpected turn. At the age of, 11 she was diagnosed with Acute Lymphoblastic Leukemia (ALL).

A routine pediatrician visit turned into Scarlett immediately being admitted as a cancer patient to the 7th-floor oncology of the Children’s Hospital in El Paso where she underwent a bone marrow biopsy.

The Journey to Save Scarlett’s Life

And so, it began. Scarlett traded her soccer practices and games for overnight hospital and emergency visits, chemotherapy, and side effects on her journey to save her life.  As if this journey wasn’t challenging enough, she went through it all during a pandemic. In the fall of 2020, during the height of the pandemic, a bout of chemo led Scarlett to suffer a fever that she could not beat. She was admitted to the hospital, where the medical staff assumed she had COVID. Despite negative test results, they continued to treat Scarlett for COVID. Mariana remembers, “They insisted she had COVID, but we had been in quarantine for months, and I knew it was something else”. Finally, they did an x-ray which led to a lung biopsy revealing Pneumocystis Jiroveci Pneumonia (PCP), a deadly infection due to the chemotherapy she was receiving.

The Best Valentine’s Day EVER!

With this added threat to Scarlett’s life, the only course of action was to place Scarlett in a medically induced coma. “The doctor warned me that there was a good possibility she would not come out of it. I was the only family member allowed in the room with Scarlett as she stayed on life support for six days. It was the most isolating and stressful moment of my life.” By some miracle and by Scarlett’s tenacious spirit, she survived. Ten days later, Scarlett was discharged from the hospital. On Valentine’s Day 2022, Scarlett rang the bell at the hospital – she was officially in remission.”

Make a Wish Foundation & The US Women’s National Soccer Team 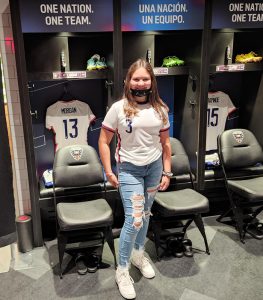 Over Labor Day Weekend, the Orwig family was treated to a once-in-a-lifetime trip to Washington DC by the El Paso Make a Wish Foundation.  Scarlett’s wish was to meet the US Women’s National Soccer Team Champion, Alex Morgan.  Not only did she meet Alex, but she also met other team members, including Lindsey Horan, who played on Scarlett’s national club Rush Colorado team.

Scarlett is back to enjoying the everyday trials and tribulations of a teenager trying out for varsity for the Franklin High School team. Her club team keeps her busy year-round, and she already has two goals for the season. Scarlett aspires to follow in her role model, Alex Morgan’s footsteps, and one day play for the US Women’s National team.

A Mother’s Work Getting Done

During the ordeal, Mariana continued to perform her duties as Senior Risk Management Coordinator for JFC. Mariana explains, “Scarlett’s treatment occurred amid the pandemic. We had to designate one person to be with her in the hospital during her treatments. Work was my refuge as we waited for results, as she slept and rested between treatments and tests. My work was a welcome distraction, keeping my mind off the pain and challenges Scarlett was facing. JFC went out of their way, even supplying me with a stronger hot spot to stay connected during our hospital stays where spotty Wi-Fi was a constant issue.”

A Final Word of Gratitude

“Scarlett and I deeply appreciate the support and kindness during this difficult time. I’m grateful to spend my weekends and free time watching Scarlett play soccer, focused on scoring the next goal.”